Katrina gets a Refurb…

Okay, so more than a year ago (I know, lazy me) I had a little issue with Katrina, the ’97 Triumph Trophy, after I’d performed an annual maintenance on her in preparation for a rideabout. I’d put in some carb cleaner additive and run the engine a few minutes, then parked her in the shed for the night. The following morning I was going to pull her out and give her a good bath for the trip…

I knew before I opened the shed that something was very wrong. The smell of fuel permeated the air. I opened the shed doors and the floor was soaked, and she was still dripping. The carb cleaner had loosened something up in the tank, and stuck both the vacuum-operated fuel valve and at least one of the carb floats. She was hydro-locked with fuel in one of the cylinders. Dang…

I began the tasks associated with fixing the problem(s), and ended up deciding that what she really deserved was a complete refurb of the fuel and vacuum systems, to include new fuel and vacuum lines, a new petcock, and a rebuild of the carburetors with all-new seals and o-rings. So I ordered the parts ….

If you’ve been following me here, you know I’ve gone through a few different bikes and done a lot of riding lately. That has meant that I haven’t done much wrenching. None, in fact. 🙂 So now, with the Speed Triple on its way from the other end of the country, I decided I needed to get Kat out of the shed and put her on the parking platform next to Simba so I could work on her ‘out in the fresh air’. That shed is a bit claustrophobic, and gets really warm inside during the day. Yes, an excuse; but hey, I can do that too.

So here she is parked next to Simba this evening, ready for me to dive in tomorrow morning. Might take a week or two to finish everything up; but that’s okay. She’ll be ready to rock.

Kat snuggled up next to Simba, waiting for her mechanic to get to work… 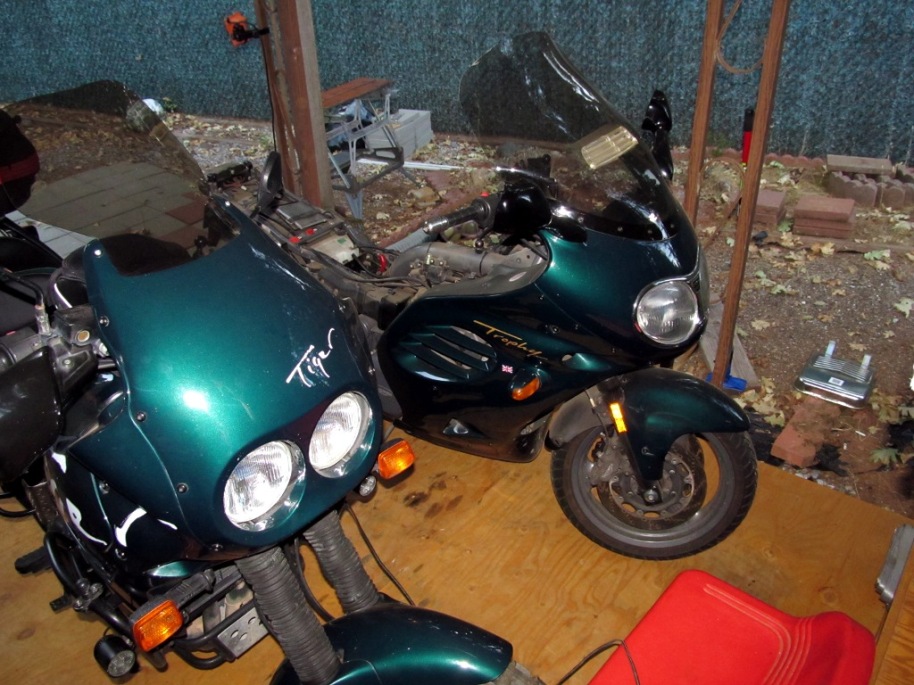 Got started on the project today. Cleaned things up so dirt doesn’t find it’s way into the innards of that sweet triple, then pulled the intake snorkels, the battery box, and moved the ignition coils out of the way so I could see the next steps clearly.

I’m thinking I should setup the Hero2 to capture some video as I deconstruct the complicated vacuum plumbing before I pull the airbox and carbs….

Couple of pics after pulling the battery and battery box, moving the coils out of the way, and preparing for the vacuum system rebuild. I decided to do that before pulling the carbs, just because it makes sense to me that way.

Battery box and coils out of the way, lots of vacuum hoses there!

A little closer in. You can actually see the carbs now!

So I’ve been reading up, soaking up the knowledge of others who have been through this before. I was thinking perhaps I could do this job without pulling the fairing off, as the experts declared I must. Well.. they were right, as it turns out. So today’s task was to remove the fairing panels so I could get to the screws on the intake manifold clamps.

With the fairing out of the way, it’s much easier to access things … 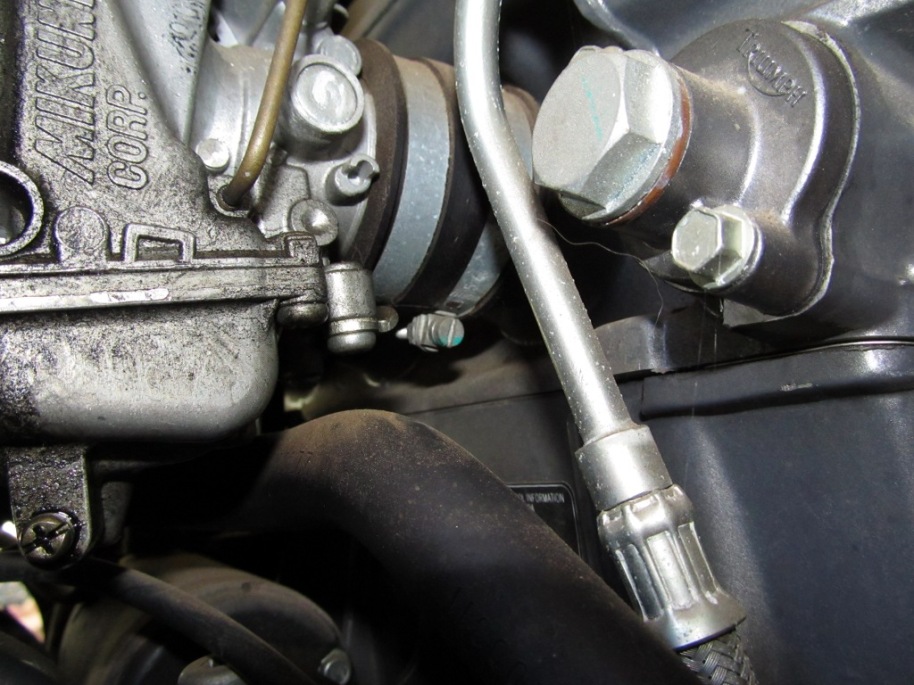 … and now you can actually SEE those screws!

As you may have noticed, I am progressing VERY slowly, and that is the way I prefer to work on projects like this. One step at a time. Take a step, then bond with the machine and the new bits that have been revealed before taking the next step.

After a busy Sunday and Monday I got back into the project, disconnecting throttle and choke cables, breather and vacuum hoses, and loosening up the boot screws. The excellent instructions (from the web) suggested the next step would be to ‘move the airbox back as far as it will go’, followed by wiggling and tugging the carburetor rack to pull them off of the intake manifolds. Well… not as easy as it sounds. 🙂 There are many hoses in the vacuum and emissions systems that will have to be removed before the airbox can be moved more than about 1/4″.

Boots loosened, cables disconnected; but how does the airbox move?

The hoses in the indicated area must be removed, that’s how!

If you didn’t know this was there, you’d have a problem! It’s under the carbs, in the middle!

So, after disconnecting the vent hose and removing the vacuum hoses that were in the way, I went to work on the carburetors themselves. And…. SUCCESS! 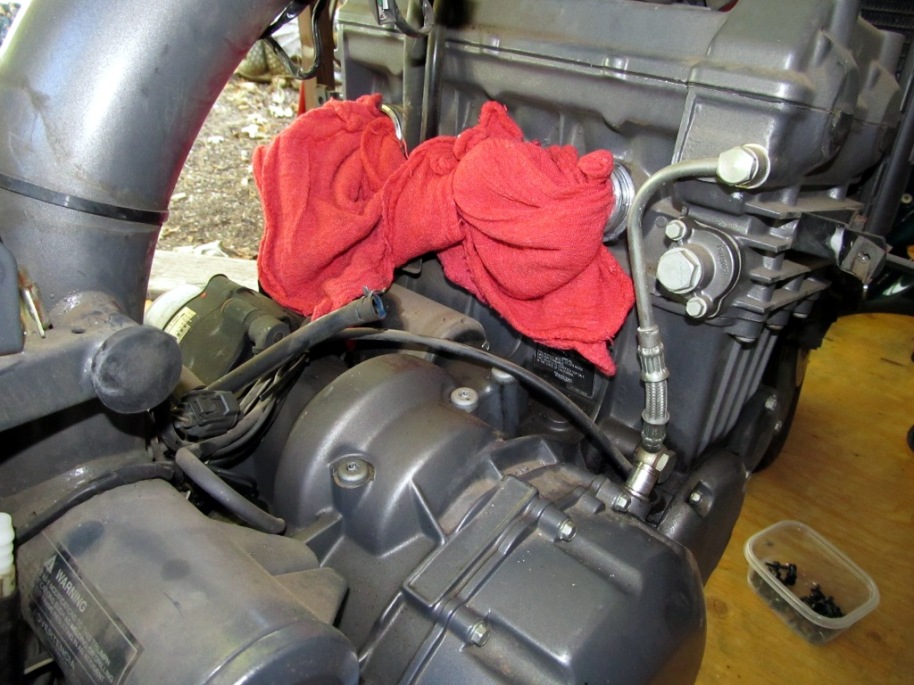 A sizeable emptiness where the carbs and airbox were once in residence!

The carb rack, ready to tackle next. I’m expecting much grunge inside these babies.

So today I pulled the float bowls to get at the culprit(s) in the ‘episode’. Kinda surprised at how clean things were: 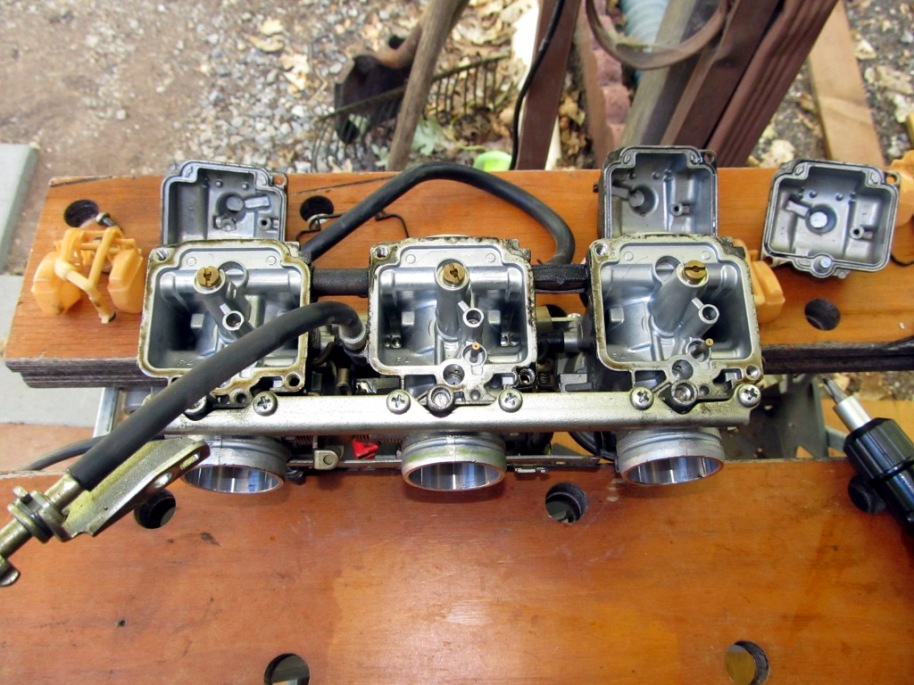 Surprisingly little varnish buildup in these carbs. Chevron with Techron! 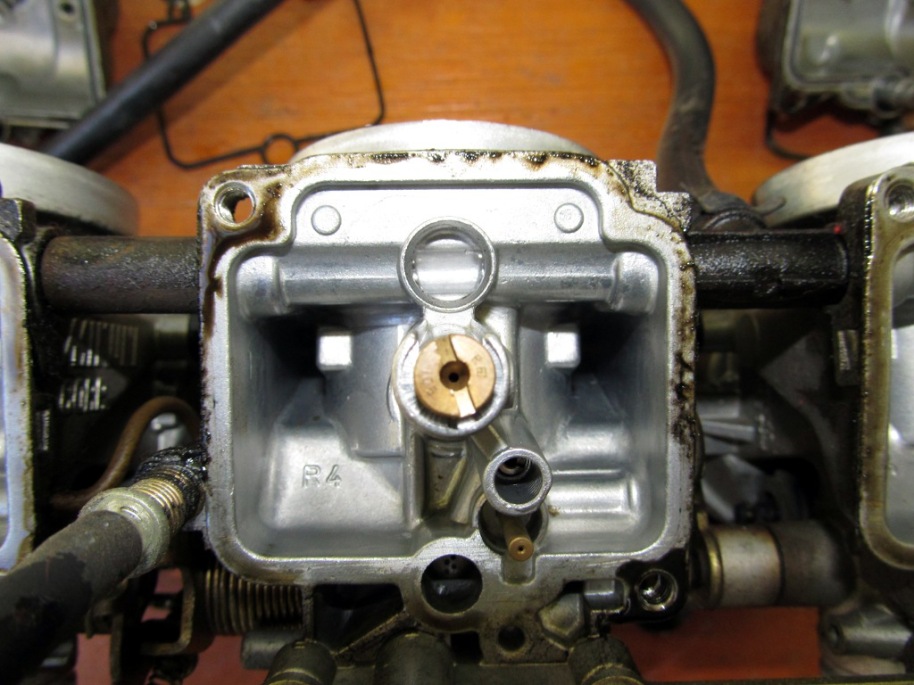 As it turns out, this is the carb that flooded the cylinder…

While cleaning out the float needle on #2 (above), I found quite a bit of ‘particulate matter’ – evidence that this indeed was the culprit. #1 and #3 were clean.

Bowls and jets soaking in cleaner, I’ll let them go until later today, then reassemble

I had some extra time, and decided to make use of it by going through the vacuum hoses on the bike. Lots of cracking at the fittings, and nearly all had to be replaced.

Some of the new tubing is a lovely blue. Looks like spaghetti. Hope I can get it all back together!

Carbs all cleaned up and reassembled:

They’re even cleaner inside!

Okay, so after a few days of taking care of other bike stuff and taking delivery of Mantissa (‘Coming Soon’ and ‘Marvelous Mantissa’) I got back to work on Katrina. There were a couple of items I needed to replace while I had the fairing off, so I installed the new Xenon headlight bulbs and the new speedometer cable so as not to forget to do those things.

Then I got serious, mounting new boots on the new airbox/filter, fitting the crankcase breather hose to the new airbox, and fitting new fuel land vacuum lines to the carb rack. Then the airbox was put in place, routing a few vacuum lines so they would go back where they were before disassembly. A bit of petroleum jelly was used on the carbs and the intake manifolds to allow the boots to slide on easily (well, as easily as can be expected). Then I began the somewhat tedious process of routing the throttle cable along the frame, under brackets, through small spaces, and up to the handlebar. It’s a tight fit in a couple places, and there are large bundles of wiring you need to navigate around without messing up the harness.

Once the throttle cable is routed, the carbs can be maneuvered into place. LEAVE THE BOOTS OFF to get the carbs into the narrow gap between the airbox and the engine! A bit of wriggling, some grunting, maybe a little swearing, perhaps even a skinned knuckle or two, and the carbs and boots will look like this:

Then the choke cable should be connected and checked. It’s a pretty simple procedure. Oh yeah, don’t forget that crankcase breather hose!

The hidden crankcase breather needs to be fitted!

A bit more wriggling and those boots are nearly there… 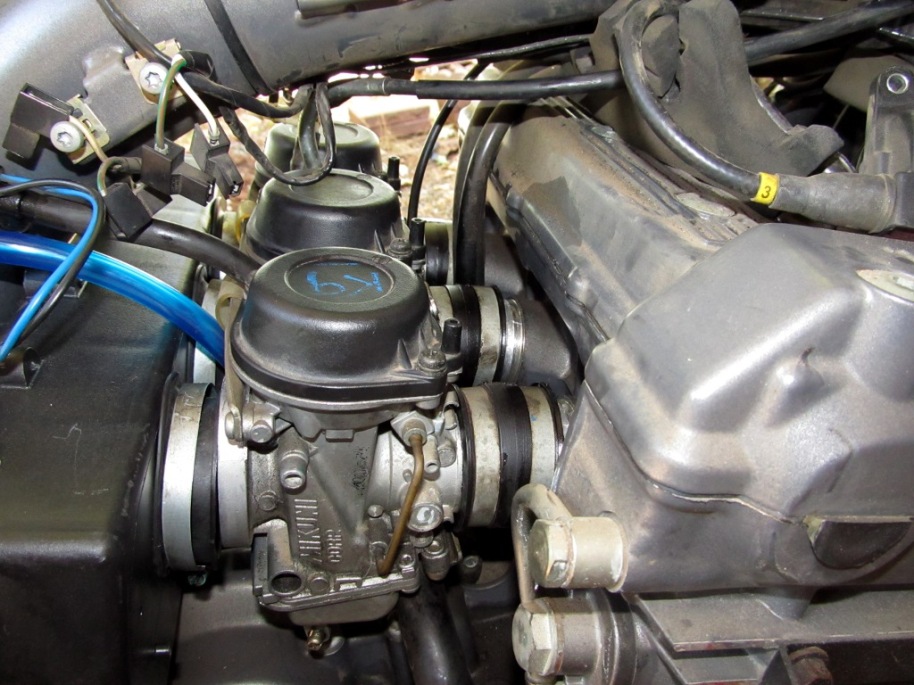 Made the final wriggle-n-shove to get the boots seated on the intake manifolds and carbs:

Carbs nicely nestled up to the engine …

With the carbs in place and all the boot clamps tightened I decided to go to the puzzle that is the throttle cable and handgrip with its associated switchgear. It is NOT a simple task to get this back together …

It’s a puzzle I tell ya!

That alignment notch (actually a small hole in the handlebar) is critical to getting assembly back together! You have to get the throttle cable positioned such that when you set the switchgear ‘half’ in place, it lines up with that notch. Otherwise things won’t fit.

This is the other half of the switchgear ‘pod’

Just too much going on, so many rides, no time for wrenching this month. So I bit the bullet and moved Kat back into the shed where there’s plenty of light and a heater. She WILL be finished in time for Spring riding season. Really. Gotta git ‘er done! 🙂