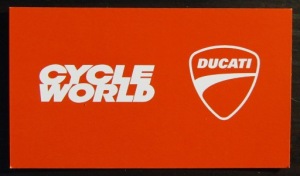 Thanks to Cycle World and Ducati!

A few months ago I received an e-mail inviting me to participate in an online survey from Cycle World magazine, and to complete a profile of my riding history and preferences. Seemed like a reasonable thing to do, and with the possibility of being selected for a special ‘event’ I did it. A couple of weeks ago I received an e-mail from Tonia Troncone, the Event Coordinator for the magazine, announcing that I’d been chosen to join them, and requesting that I select from the days (Sat/Sun) and times that were available. I chose Saturday at noon, since I had to ride 150 miles to get to San Mateo and figured it was about three hours. Cool.

Simba and I left home with an extra hour in hand, just to be sure we arrived on time if there were traffic issues along the ride through the Bay Area. It was a nice morning for a ride, no issues were encountered, and we arrived with almost an hour to spare. Another gent had arrived as I was stretching, stowing one camera and the GPS while extracting another camera to shoot the ride. Here’s a pic of Simba, parked next to a Ducati Multistrada in front of the Ducati Caffe and the tents used for registration and the orientation meetings. 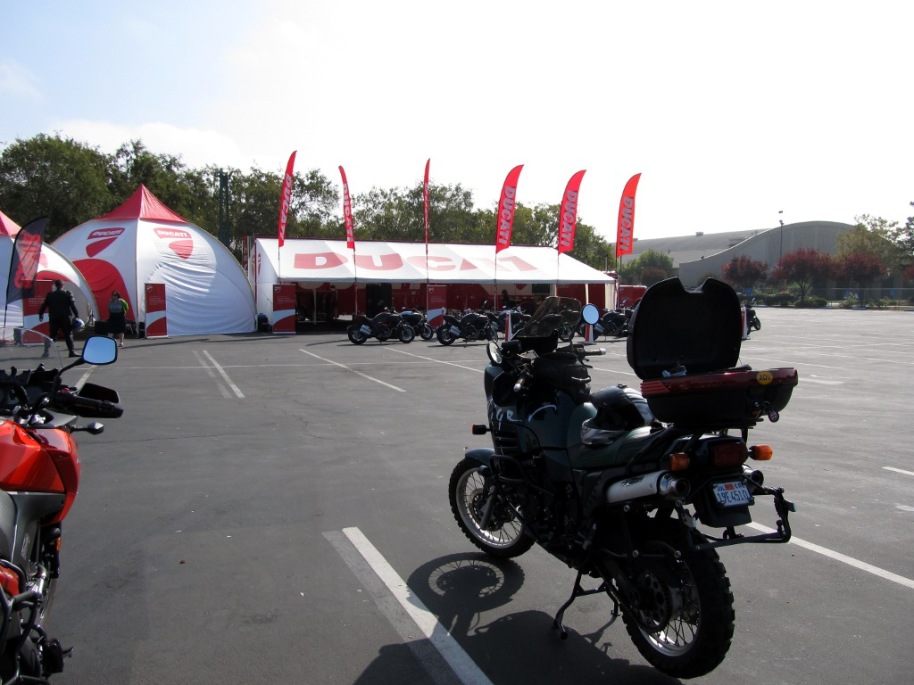 Simba at rest after our morning ride to San Mateo 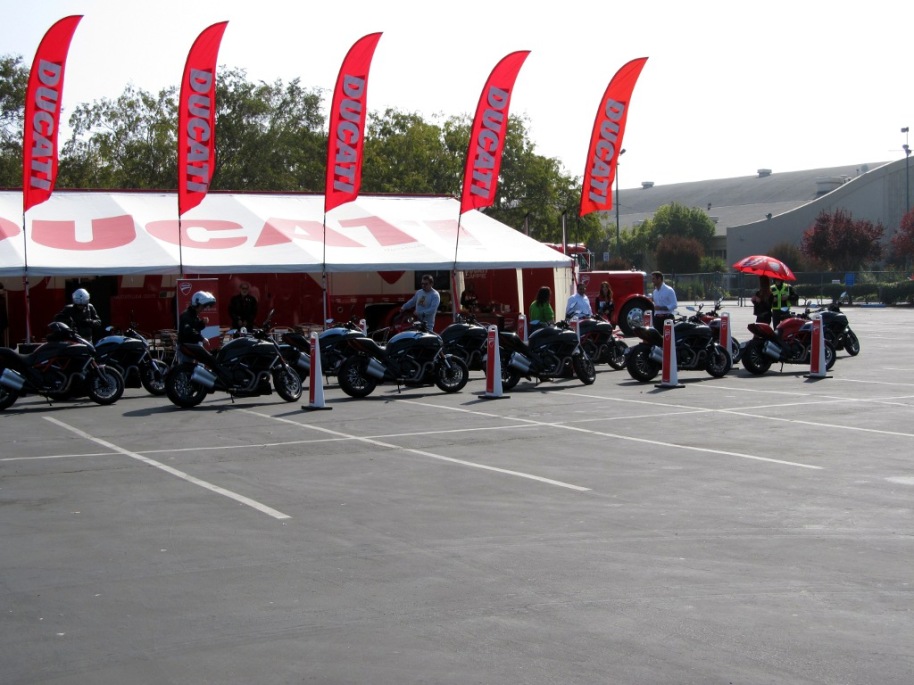 The bike lineup in front of the Ducati Caffe – with the previous group preparing for their ride.

I drifted over to the ‘event center’, met Tonia who was a delightful young woman, and Dave, another rider attendee who had ridden up from Monterey. After a short conversation Dave and I made use of the ‘facilities’ before heading in to register. Then we headed over to the Ducati Caffe and made friends with the two lovely ladies serving Espresso and ‘rider food’ in the form of fresh fruit and biscotti. 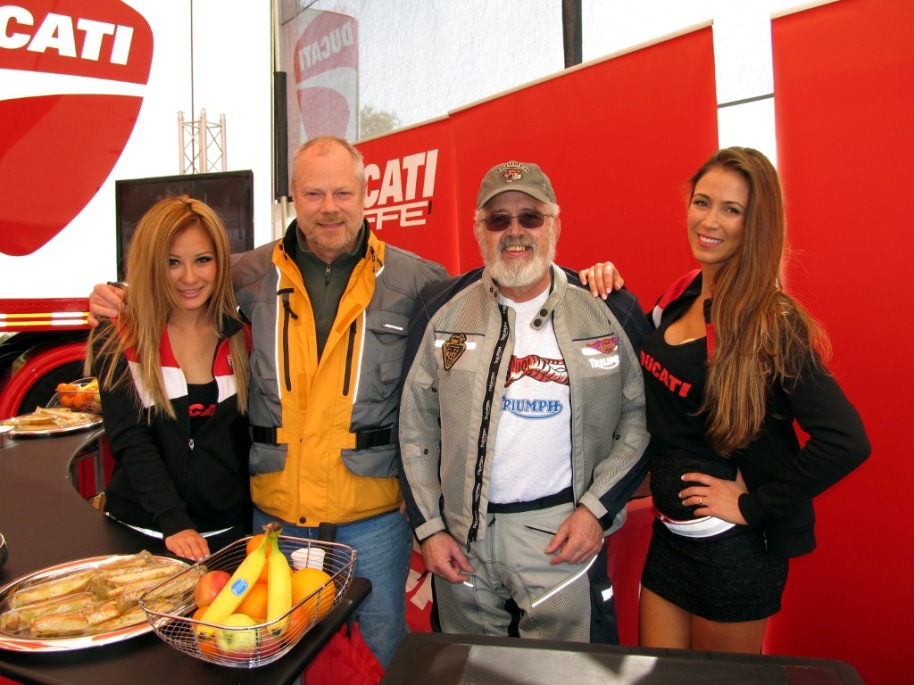 A fair amount of chatter ensued between riders who were arriving at regular intervals as our ‘designated time’ approached. We were called into a ‘classroom’ for our introduction to the Diavel, most of which was in the form of an interesting (if a bit ‘fluffy’) powerpoint presentation given by a Ducati representative. The information about how and why the Diavel ended up as it has was pretty informative. Then we had a short pre-ryde speech given by the gent who would be our ride leader, also a Ducati guy who would be riding his personal Diavel. 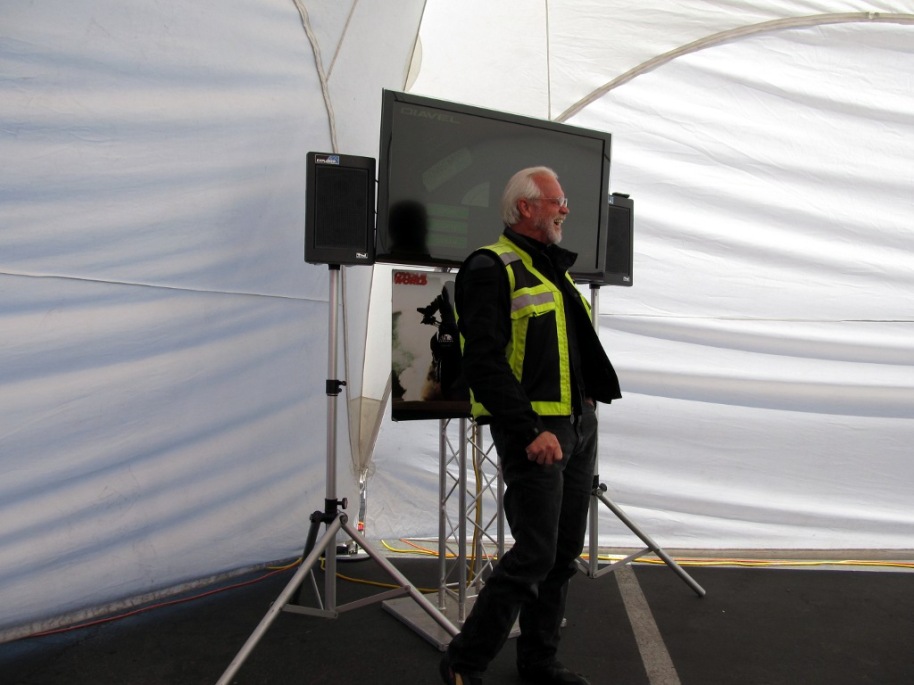 Our ride leader laying down the rules of the ride…

Then it was out to the bikes, where we were given more detailed instruction on the operation of the bike. If, like me, you’ve not had hands-on experience with anything newer than an early 2000’s motorcycle, this was useful information. The Diavel uses a ‘proximity’ key, so there isn’t a conventional ignition switch and the starting procedure isn’t intuitive – at least not until you’ve done it once. Controlling the DTC/ABS electronics was also covered, and was pretty simple.  With all the instruction completed it was time to gear up and climb aboard, and a photo-op with one of the Ducati umbrella girls happened. 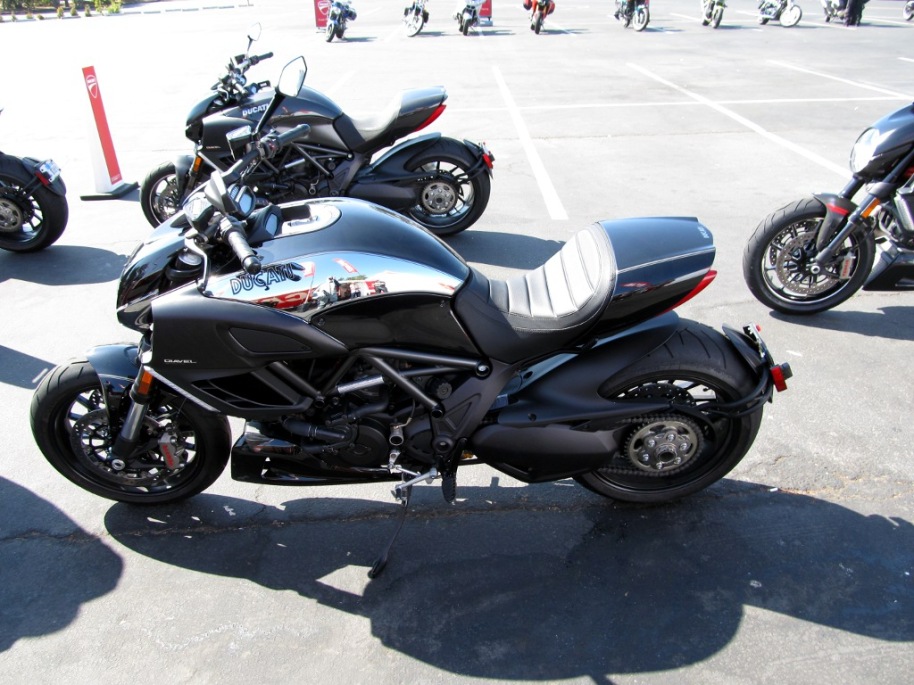 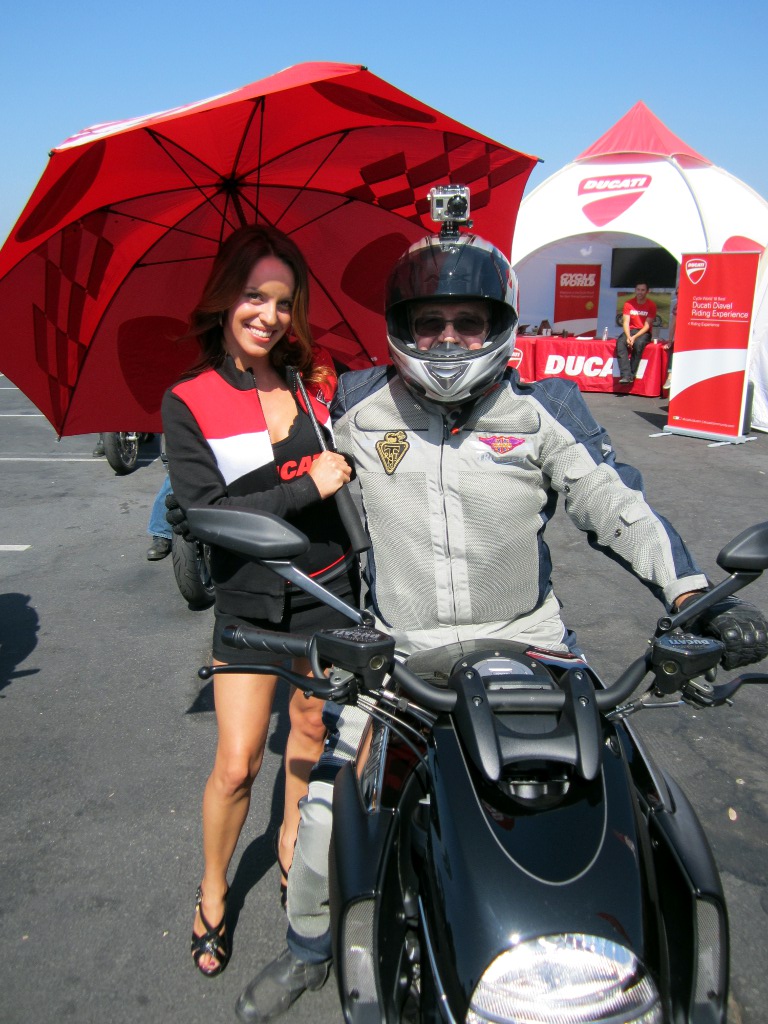 The Ducati Diavel is being put into the ‘Cruiser’ genre, and by Ducati standards that is where it should go. It’s seating position is very much upright, the rider’s footpegs are farther forward than on any other Ducati model, and the styling is somewhat more bulky and brutish than the usual delicate beauty of Ducati. Okay, it’s a power cruiser. Perhaps there is competition from the Yamaha/Star V-MAX, and maybe even the Harley V-Rod; but certainly none of the other twin-cylinder cruisers.

State of the art technology glistens on the Diavel, and performance is clearly the primary objective as you would expect it to be. But on a cruiser?

Yes, on a cruiser. Having owned one of the first real power cruisers (a Honda V65 Magna), I thought I had a pretty good feel for what this genre should do. I guess you could change the handlebars on a Magna and get the riding position close. And you could upgrade the suspension components and the brakes. IMHO, the V65 doesn’t need more power than it has, so I’d make that an even deal even though the Diavel has 50% more ponies than did the V65. Okay. It’s a power cruiser.

So what’s in the Diavel’s package that makes it special?

Simply put, it’s a Ducati. You know all the moto-jargon that accompanies every magazine article covering a Ducati? It’s all in there. The superb single-finger Brembo brakes, the stable-as-a-rock chassis and suspension, and… a somewhat awkward riding position (more on this later). The instrumentation is well designed and easy to read. The ride-by-wire electronics package with three different ride modes is easy to access and difficult to detect – on a short street ride anyway. The little details that make a bike a Ducati, and therefore special, are all here.  And they all work together quite well. Fueling was superb under all the conditions I encountered, and shifting was easy, the actual movements of the shifter almost imperceptible with both upshifts and downshifts. Although they’d made a point about the clutch effort being ‘light’, my hand was getting pretty tired in the stop-and-go traffic we encountered on the ride; but that was probably the conditions rather than the clutch effort. I haven’t ridden in traffic like that in years.

One small niggle is the ride quality. Frankly it’s far too harsh to encourage long rides. On a short one it was noticeable; but tolerable. I wouldn’t want to do a long day on a Diavel (unless it was my only option). So there you have it. I’ll leave the numbers to the magazines.

Alright, so we were invited to this event with the purpose being to take one of these beasts on a ride on some curvy roads in the nearby Santa Cruz hills. The road is well known to every rider anywhere near the San Francisco bay area, and to many much farther away. I personally spent a LOT of time riding Skyline Drive, stopping at Alice’s Restaurant for a hearty brunch, then riding back to Silicon Valley down the infamous Hwy 9 in Saratoga. It’s a fine place to evaluate a motorcycle’s dynamic qualities, or to highlight it’s flaws.

Our ride leader was a gent who worked for Ducati, and was riding his personal Diavel to lead us to – and through – the hills. The rules were simple. ‘Urban mode only’ in town (this is the most tame of the three DTC modes, providing the least power and highest level of intervention from the traction control system), and NO PASSING of anyone, by anyone. Your place in the line when you leave is the same as your place in that line when you return. Oh yeah, and no burnouts, wheelies, stoppies, or other flagrant displays of hooliganism.  Okay. I can live with that.

We left in an orderly fashion from the parking lot at the San Mateo Event Center, and made our way quickly to Hwy 92 toward Half Moon Bay. As is the norm for this section of this road, the traffic was awful for several miles leading up to our turnoff onto Hwy 35, also known as Skyline Drive.  Once on Skyline the ride leader picked up the pace nicely, giving us an opportunity to enjoy the considerable capability of the Diavel. Frankly this is far beyond any cruiser I’ve ridden, including my beloved V65 Magna. Push it through a set of curves and the Diavel hunkers down and attacks, as planted as all but the very best sport bikes, with a broad power band that just pulls harder and harder as the revs rise. There were no straights long enough to stretch the Diavel’s legs on Skyline, at least not between 92 and Alice’s Restaurant, where we turned around to head back. We did, however, catch up with a couple of sportbike riders who had passed us while we were stopped in the Hwy 92 traffic earlier. That was fun.

The return was more of the same, with the ride leader wicking it up for as long a stretch as we could manage before encountering traffic. Nothing too illegal; but fast enough to put a big grin on my face.  That grin was still there when we pulled in front of the Ducati Caffe and I pulled off my helmet.

Tonia was there to greet me with a big smile. “How was your ride?”

“Fantastic” was my response.  And it was.

My only issues with the Diavel are that choppy ride and the more-forward-than-my-usual footpegs. The combination resulted in a sore butt after an hour in the saddle.  Not a comfortable all-day ride then.

But that grin was still there.

I was glad to climb aboard Simba for my return to the Sierra Foothills; but it had been a good day, a good day indeed.

My heartfelt thanks to the staff at both Cycle World Magazine and Ducati America, and especially to Tonia Troncone.  The event was both enjoyable and informative!

To my surprise, when I returned to Simba to head home, there was a Roulette Green Speedie parked next to us! 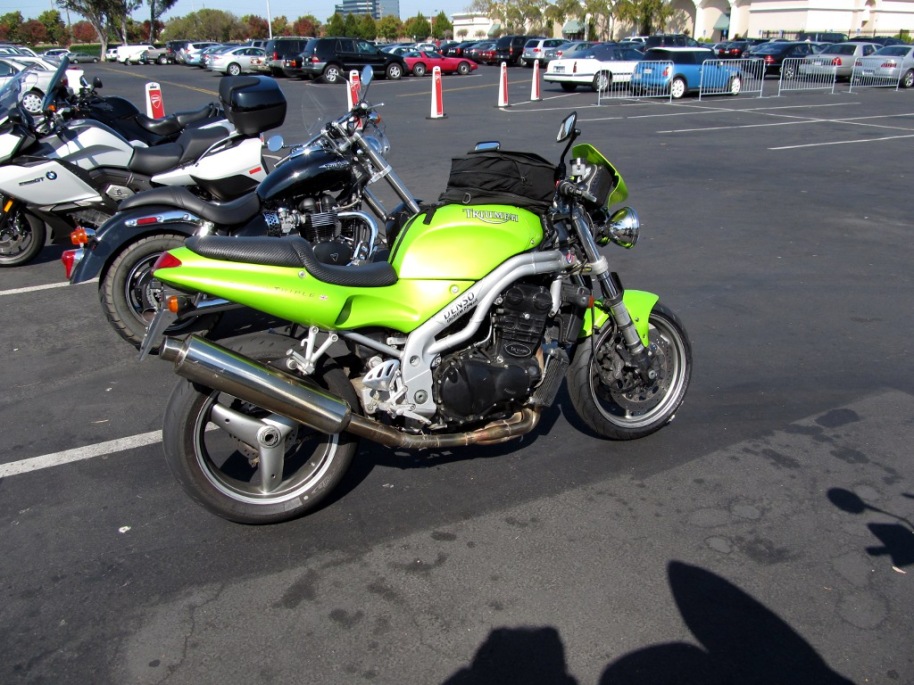