She’ll be coming to Pioneer on Tuesday 8/9. A beautiful 1986 Honda VFR750F with all the ‘right stuff’. With funds gathered from the sale of Vikki, I found and purchased this beauty! 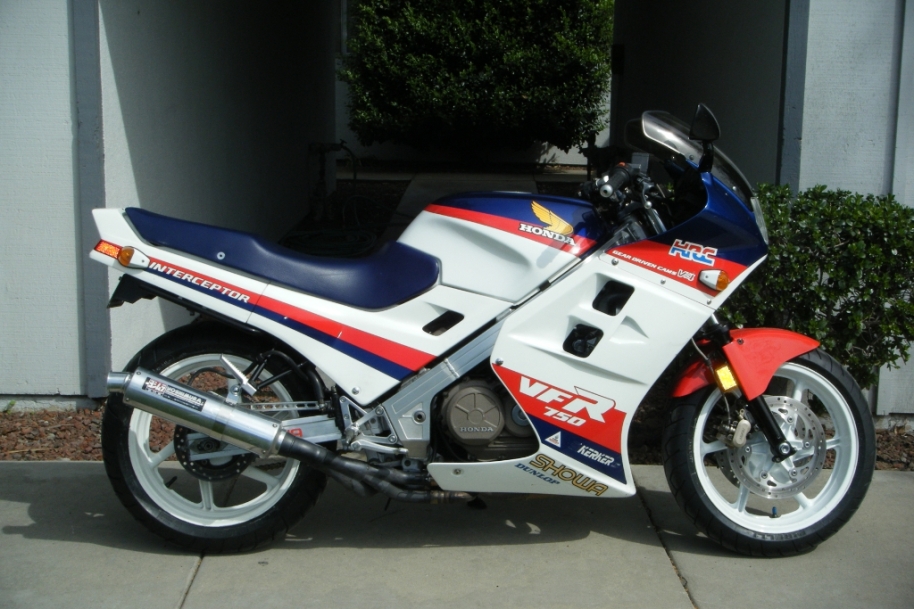 Just a few words about this bike. First, as you can see in the picture, she really isn’t a ‘project’ of any kind. She needs nothing other than to be ridden, so this page will be about that. I’ll equip her with a video camera mount, and one for the GPS, and we’ll go on some adventures together.

In the early 1980’s the US Government established a very large tariff on imported motorcycles with a displacement of more than 700cc. This was an attempt to ‘protect’ a failing Harley Davidson, who claimed not to be able to compete with the motorcycles from Japan and Europe. In 1986 this tariff was still in place, and a majority of the VFR’s Honda imported were 700’s (VFR700F). But they did import a few VFR750F’s for those customers who wanted all of the performance and didn’t mind paying an extra $1000 (about 20%) for that privilege. Val is one of those bikes, and has been upgraded and modified over the years to keep it modern and current. I’ll provide more details and pictures after I ride the bike back here next week. She’s a beauty.

Now for a few technical details.

One of the single biggest complaints about this first-generation VFR was the size of the front wheel. At 16″ in diameter, it tended to make the bike ‘twitchy’. While maneuverability was excellent, the lack of stability was not a rider’s friend when not on a racetrack. The other problem – also with the wheels – was that they were somewhat narrow which limited the width of the tires that could be mounted. Subsequent generations of the VFR were equipped with 17″ wheels front and rear, the same size used on modern sportbikes, allowing them to have premium tires mounted. Val had a conversion done which mounted the wheels from a Honda CBR600F2, 17 inchers at both ends, wide enough to mount tires far superior to those available in 1986. Val also has premium EBC brake pads, for stopping power superior to that of the stock brakes.

Another complaint about ‘sport’ bikes of this era was the quality of the suspension components. While adequate for most street riding, they wouldn’t be appropriate for competition. Val has a Fox ‘Twin-Clicker’ fully adjustable rear monoshock, and front forks equipped with Sonic springs and RaceTech Gold damping valves.

While the claimed 105 horsepower was certainly ‘enough’, Val also has a high-volume K&N air filter, a Yoshimura 4:1 exhaust system, and has had her carbs rejetted to suit the higher flow rate these components provide. I would estimate somewhere around 115 horsepower, or about an even 100 hp at the rear wheel. MORE than ‘enough’ for me. 😉

The first generation of Honda’s V-4’s had a few chronic problems with the valve train components, suffering from oiling issues that affected some bikes and not others, and reliability problems with the cam chain tensioners. At worst these could render an engine unuseable, at best it could be noisy. The VFR solved the oiling problems (really a manufacturing tolerance problem) and did away with the cam chains and tensioners by employing a more expensive but much more reliable and accurate cam drive system using gears rather than chains. This also gives the VFR a unique ‘whine’ to add to it’s robust exhaust note that many have equated to a ‘small block Chevy on steroids’. For what it’s worth, the VF1000R (like Vikki) also employed gear drive cams and improved oiling.

Drove down to Turlock this morning, stopping for a stretch in Waterloo as usual. There was a gent there on a Victory Vision tourer, which I must say is very impressive in person. The bike looks so much nicer in person than in pictures, all swoopy and sci-fi looking. He was a converted Harley guy who was very happy with the Victory. Then we headed on down the slab to Turlock, and found Val already out in the sun and ready. She looked just as nice in person as that picture above:

Dang that bike looks great! – Me and Jon discussing details.

Just waiting for me to throw a leg over…

a moment of reverence as Jon turns her over to me…

Ready to roll! (and smilin’)

The ride back was – for the most part – uneventful. The premium suspension on this bike surprised me with a relatively cushy ride on the slab; but we only stayed on the freeway for about fifteen miles before heading up the valley on side roads to pickup Hwy 88 in Lockeford and the final leg up to Pioneer and home.

Val is home with her new mates: 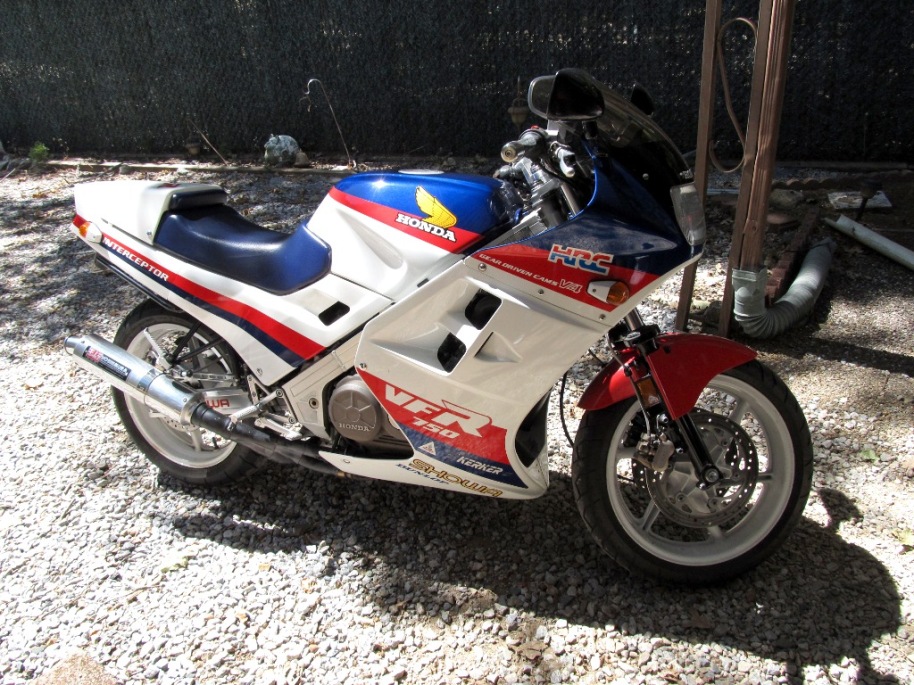 She looks every bit as good as the pictures!

She rides as good as she looks! That’s Vikki under the cover.

and the left side is nice as well!

I’ll post a soundbyte after I get the video edited. I AM HAPPY! 😀

The camera was next to the bike, as opposed to behind it. That Yosh pipe is LOUD, and I wanted to get a taste of that gear whine in this clip. I just got a new video camera mount, and will be setting her up to go shoot some video shortly. Along with the video I hope to get my audio gadget mounted up so the audio will be clear and clean. Stay tuned!

Here’s a brief ride down to the QuickeeMart:

Spent 4 hours on her today, riding in the heat to ‘test’ both myself and the bike. Other than my right ankle getting warm when moving slowly, everything was perfect. Stopped in to see my BFAM and the God-kids in Tracy:

Can you tell she’s splattered with Central Valley bugs?

My God-kids Johnny IV and Karmela with the bike

Shot some more video on my return ride from my monthly massage/chiro ‘tuneup’. Here are some notes:

– I changed the camera mount from the ZCameraMount to a RAM setup to evaluate camera stability between the two. The RAM setup was definitely more stable, and much of the ‘wave’ annoyance from the first video is gone.

– The beginning of this video has an audio track I recorded using a separate device with an external microphone. It sounds fantastic. Unfortunately, there was far too much wind noise with the mic outside the tail bag, so the audio track in the ride video is a heavily filtered version of the track from the video camera. I’ll fix this in future videos.

– I made a couple of passes in the ride video which I do NOT recommend. You’ll know them when you see them. In my mind they were not unsafe; but that doesn’t make them legal. Kids, don’t try this at home.

Mounted a shorter RAM arm and clipped an external microphone inside the rear pocket of the tail bag and shot a bit more video. I think the video is better, and probably good enough (for this view anyway), and the audio is definitely better.

For two decades I’ve heard the motomag pundits telling me what a great bike the Honda VFR is, how it will run with the uber-sport machines while being comfortable and reliable. The VFR won the ‘Best Sport Tourer’ category many years in a row – and (I think) 10 of 12 years running. It’s an iconic machine, based on all of those accounts. And I just wasn’t listening apparently. Not even to my own experiences.

Back in 2001 I was visiting friends, and was offered the use of ‘her’ bike which happened to be an ’01 VFR. The ride was an ‘escort’ mission to see another biker up to the state border on his way home with a Honda V45 Magna he had rebuilt from several boxes of parts. So me and my gracious host (on his ZX9R Kawasaki) escorted the chap up to the border, riding at a public-friendly pace most of the way. We stopped for lunch and said our goodbyes, then the Magna guy headed across the border to home while we turned around to head back down to the desert. The road was one of the most entertaining pieces of pavement I’ve ever been on – as long as you were doubling the posted limit. Wide and smooth, with mile after mile of sweeping curves marked at 60 (we were doing roughly double that and more). My buddy/host was willing to take chances I wasn’t willing to take, and when the road straightened out I let her rip. Damn if those magazine tests weren’t right – the VFR would indeed do 155mph!

I hadn’t even thought about how comfortable I was on that bike, how willing I was to go very, very quickly on a machine I wasn’t familiar with. Until today. I get it. The VFR is really that good.

Well… we ended up not getting that ride. Chris picked up Vikki in his truck and it had just rained, so we didn’t go for a ride together. So….

Here’s another video I shot while on a ride to hookup with a fellow biker for lunch:

I headed over to El Dorado Hills to meet a lad who goes by a forum handle beginning with the letters ‘TC’. He has a 2nd generation VFR very much like Val. We met at a place called ‘The Purple Place’ for lunch. Here are some pics from that visit:

Val parked in front of the Purple Place, waiting for TC’s arrival.

Our table was directly in front of where the bikes were parked! 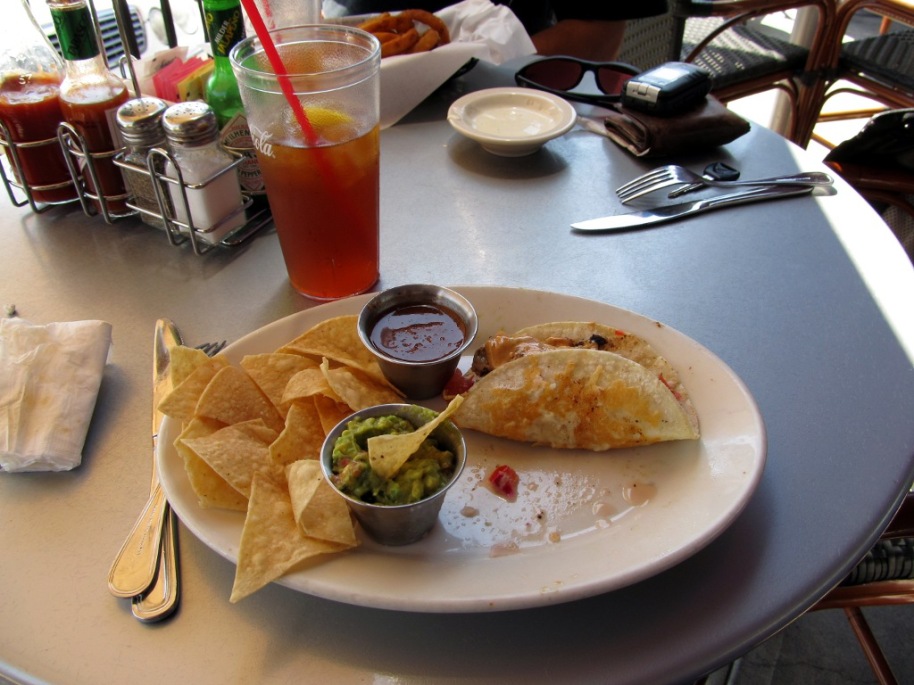 Lunch for me was fish tacos – a favorite – and they were fantastic!

Next part of this project is going to be more videos with some alternate mounting points and views.

And here’s another segment from the SMWW ride, this one is San Antonio Valley Road up the ‘back side’ of Mt. Hamilton in the South Bay hills.

More videos coming, and I have a handlebar conversion kit I’ll be installing to give these old bones a bit more ‘room’ – and another video camera (a Contour ROAM) so I can capture multiple views simultaneously.

After a lot of thought – and 2000 miles on Simba (the Triumph Tiger) – I’ve decided I just won’t be putting many miles on Val with these olde bones. I can have just as much fun with far more comfort, so Val will find a new owner soon. I may replace her with a Triumph Speed Triple if I can find the right deal on the right bike, so…

Today was the day. JP had responded to my ad, and arrived with cash in hand. Val was the bike he’d been looking for, and I think he knew it before he arrived. Both he and his lovely wife are riders. Both have other bikes. JP’s daily rider is a a Triumph Daytona 675 Triple! We had a most enjoyable visit, talking bikes after we’d taken care of business and loaded the ‘extras’ in his truck. I was sad to see her go; but pleased that her new owner would take good care of her – and ride her as she deserved to be ridden.

JP climbs aboard for his ride home…

Stay tuned, and Ryde On!